Since we’re all admirers of Native American art, I want to share with you a rare book celebrating Native American art and culture that’s written by a Hopi artist. It’s called Designs From The Ancient Mimbrenos With A Hopi Interpretation. The book was written and illustrated by Fred Kabotie, the fiercely beloved Hopi creative best known for his wonderful paintings and innovative silver overlay jewelry. Yes, THAT Fred Kabotie!

The idea for Kabotie’s book was first inspired as he observed the excavation of Awatovi (an old Hopi village) by archaeologists from the Peabody Museum. Captivated by the Hopi designs on the murals and the pottery revealed at Awatovi, Fred Kaboti concurrently discovered drawings of early Mimbres pottery, shared with him by a visiting couple, who had previously written one of the first works on Mimbres ceramics. At that time, Fred Kabotie recognized the similarities in the early Mimbres drawings that were likely connected to present-day Hopi stories. Kaboti eventually received a Gugenheim Fellowship, which enabled him to spend a year researching this connection between Mimbres past and Hopi present. The culmination of Fred Kaboti’s fellowship was his book of Mimbres designs with Hopi interpretations. The first edition of only 250 copies came out in 1949 with a revised edition released in 1982.

In a beautiful large-format book, Fred Kabotie illustrates 40 different Mimbres designs that, in his talented hands, are marvelous and compelling works to be enjoyed over and over. Kabotie then takes each Mimbres drawing and places it into the context of Hopi culture.

The book serves many purposes - it’s revealing as a cultural study, entertaining as a series of vignettes, and irresistable as a group of large, re-imagined illustrations by one of Hopi’s greatest artists. If you’re interested in Native American history and culture, if you’re an avid pottery collector, if Hopi overlay jewelry rocks your world, or if you’re enamored with Michael Kabotie’s artwork, you’ll adore this book. 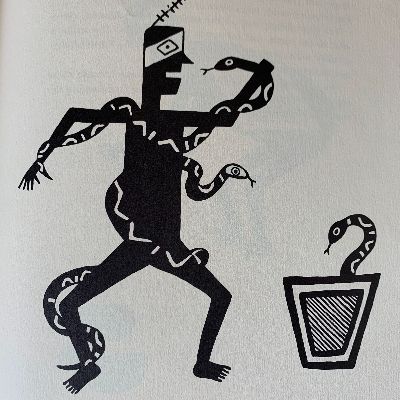 To get a taste for it, here’s INTERPRETATION NO. 39 SNAKE CHARMER:

“To many people, the snake charmer is simply a performer. This is not so with the Hopi people whose renowned snake dances are rooted in centuries of tradition. This snake charmer is a revered figure, one whose powers are strong. He is an important part of an ancient ceremony that, alternating with the flute ceremony, takes place only on even years.

The Hopi deeply respect the snake for its endurance, closeness to the earth, and influence on the clouds. The snake is credited with causing the rain that enhances the Earth Mother and all living things.

The sand and snake clans of the Hopi people humbly make supplication through these snake ceremonies, entreating the clouds to bless the earth with rain.”

If you’d like a copy of this wonderful work of art in your own library, I've found some online shops that currently have copies:

If you're stirred by these Hopi stories and would like to add a piece of inspired Hopi artwork to your collection, you can shop some beautiful pieces here.

May you continue to find beauty and delight.